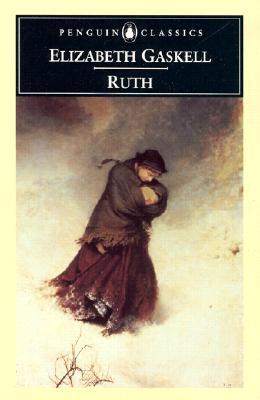 In the interests of full disclosure, I actually read this about six months ago, so this is a very retrospective review. I did take notes, though, and the reason it’s been so long is that this book was a little bit… nondescript, I guess. Perhaps, if I hadn’t read and loved North and South so very many times, I would have liked this more, but as it is, it didn’t wow me. I think that the book suffers from having become dated far more than most Victorian classics. Let me explain why.

Ruth tells the story of a young girl, 15 years old, who has lost her family and found herself in “reduced circumstances”. She has therefore been forced to take employment as a seamstress in is effectively a 19th-century sweatshop. One evening, she has to work at a ball repairing any wardrobe malfunctions that occur, and as she is mending one particular tear, she catches the eye of ball attendee Mr Bellingham. Right from the start, it is clear to the reader–but not to Ruth–that he intends to use her until he grows tired of her. She falls in love with him, and the story progresses as expected: she loses her job and travels with him as his mistress, until his family become aware of her existence and he leaves her. When he leaves her, she is pregnant with his child, although he doesn’t know that. She’s given refuge by a kind Dissenting minister and his spinster sister, and the bulk of the novel essentially follows her (and, to a lesser extent, her son) throughout a process of “redemption”, whereby she atones for her supposed one great sin, all the while trying to conceal it.

The issues that hampered the narrative, for me, were twofold: a) gaping values dissonance between the Victorian era and the present day, and b) theological differences between myself and Mrs Gaskell. Firstly, let me deal with a). When writing Ruth, Gaskell was hamstrung by the very cultural issue she was attempting to highlight: the double standard between men and women who have sex before marriage. Because falling pregnant out of wedlock was considered a particularly appalling sin for a woman, and because Gaskell was trying to demonstrate that women should not be dogged by this one mistake for the rest of their lives, Ruth’s character is almost sickly-sweet. She is pious and loving and docile, a positive martyr to the needs of others. Ruth is constantly portrayed as maternal, gentle, and above all, incredibly obedient. She has no real spark of personality–she’s just a generic “good girl”, with all the feminine virtues that such a gendered society could possibly desire. Of course, the reason for this is that Gaskell is trying to confound the commonly-held stereotype of a “fallen woman”, but in doing so, she inadvertently creates another caricature, one which is arguably less interesting than the original.

In terms of b), Gaskell was a Unitarian–at least, she was the child of a Unitarian father, and married a Unitarian man, which is not quite the same thing, but is all I have to go on until I read her letters. Unitarians do not believe in the Godhood of Jesus or the concept of atonement and salvation through faith in Him*. This strongly affects the way that Gaskell writes Ruth’s story. Without a concept of salvation by faith alone, she ends up with a narrative that relies very heavily on Ruth’s deeds to assure (rather than demonstrate) her redemption. (NB, spoilers in the rest of the paragraph). In the closing chapters of the book, Ruth takes a job nursing patients with highly contagious typhoid fever. She escapes the fever, but then learns that Mr Bellingham has fallen ill. Naturally, even though there are other nurses available at this point, and even though she is extremely run-down and the doctor says she’s not fit to nurse anyone until she’s restored to health, naturally she selflessly takes his case anyway–not out of any remaining romantic feelings, but because she ought to. She falls ill and dies, which is inexplicably presented as a victory for her. It is as she is dying that she is redeemed in the eyes of her son, who had previously dismissed her as a wanton little slut when he found out about the illegitimacy of his birth. He forgives her, not because she is such a good mother, not because he loves her and he forgives her, not even because he recognises the grace and forgiveness of God, but because she is Doing Good. Other people express pride in her actions, and because she suddenly becomes a mother he can be proud of–not a mother he loves unconditionally–he forgives her. It is forgiveness because of deeds, not because of grace or love.

(I am exaggerating a little, I suppose. The Dissenting minister doesn’t kick her out when he finds out about her pregnancy, and his sister is brought round to his point of view eventually, both because they recognise the grace of God to forgive–but even they seem to feel that the best course of action is for her to live very quietly, do lots of good things, and try not to make any more mistakes). It’s difficult to love a book that teaches–very openly, because this novel has even more preaching in it than Little Women–something so different to the unconditional love which I believe is taught by the Bible.

Of course, Gaskell is an extremely accomplished writer, and there were things I loved about this book. My favourite section was actually at the beginning, when Ruth is still working as a seamstress. The section where she is working at the ball presents a fascinating contrasting viewpoint to the way we normally see these events in literature. I could almost picture Emma Woodhouse as the snobbish, impatient heiress having her dress mended by docile, frightened Ruth. There is also a very convincing depiction of poverty painted in those first few chapters–they are streaked with river-mud, squalid with TB and insufficiency. I think that this is where Gaskell’s writing is strongest, both here and in North and South. A later chapter also contained this quote, which spoke deeply to me:

[She could] tell God what I have now told you, that she feared she loved her child too much, yet could not, would not, love him less; and speak to Him of her one treasure as she could speak to no earthly friend. And so, unconsciously, her love for her child led her up to love to God, to the All-knowing, who read her heart. (p173 in my edition)

Although I don’t have a child, this is a very accurate description of the way I feel about the people I love best. I think it is perhaps the truest sentiment expressed in the book, the way that other relationships can point us towards God. However, the overall tone of the book, despite some beautiful passages, is not one that I enjoyed.

*I am not a Unitarian. I did do some research as I was reading Ruth and again as I wrote the post, and I believe I am representing mainstream Unitarian theology reasonably well; if you are a Unitarian and this is not an accurate representation of your beliefs, please correct me in comments! I always want to learn.