I am so glad that Nonfiction November encouraged me to spend my reading time finishing off Blood Work: A tale of medicine and murder in the Scientific Revolution by Holly Tucker. It is one of the most engaging and compelling books I’ve read in a long time-and yes, that includes several fantasy novels about travel between worlds. Blood Work tells the story of early blood transfusion experiments in 17th century France, set in the fascinating context of religious, political, and aristocratic machinations in both Paris and London. It takes in the Great Fire of London, an outbreak of plague, the building of Versailles, and a marauding band of pirates. The characters are vividly drawn, and the line between history and storytelling is nicely navigated. 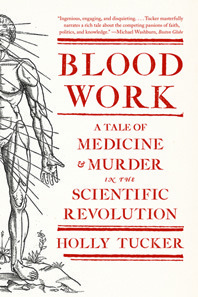 The particular issue of blood transfusion, in this book, becomes a microcosm of the Scientific Revolution as a whole. It is tempting to view the late 17th through 19th centuries as a period of rapid enlightenment, where the curtains finally closed on the so-called dark ages and reason became the driving principle of scientific and medical research. Blood Work shows in vivid detail how misguided that is. Among other things, many of the earliest transfusion experiments were driven by one aristocrat’s desire to collect all the best scientists around him so that he could outshine the Sun King. In fact, palace intrigue (both literal and metaphorical) seems to have played a fairly substantial role in the development of early transfusions.

Of course, without the ability to cross-match or any knowledge of blood groups, even human-human transfusions were incredibly dangerous. Denis, the central character of this book, transfuses blood into humans from sheep and calves. Perhaps it’s therefore unsurprising that his most public transfusion (initially claimed to have “cured” a homeless, mentally ill man) was followed by the very public death of the recipient. Denis was subsequently accused of murder. However, given all the politics and drama underpinning the development of transfusions, the situation was not necessarily as it seemed. Tucker attempts to turn the situation into a whodunnit, which is the way the book is described in its blurb. For me, this was the weakest aspect of the book – there is so much foreshadowing and explanation and heavy-handed clue dropping that it doesn’t really read like a mystery. That’s not to say that I didn’t enjoy it, just that it wasn’t as gripping for me as everything else. Advertising mystery as the purpose of the book, to my mind, is rather underselling its most interesting aspects.

More interesting than the mystery is Tucker’s detailed exploration of the philosophical, ethical, and religious concerns surrounding blood transfusion. As she explains in the epilogue, some of these are echoed today in the way we talk about stem cell and genetics research. Of course, ethical concerns are legitimate, just as they were back then. Vulnerable people are at risk of being exploited in medical research (and, as someone who has been battling an ethics committee for most of her PhD just for permission to talk to healthy volunteers, it was good to be reminded why we have medical ethics in the first place). Somehow Tucker made her discussion of these issues impossible to put down. By the time I got to the end of the book, I was snatching moments to read whenever I could, which is a feeling that I normally only get with novels.

In short, I really recommend Blood Work, albeit with one caveat. I would advise anybody who is an animal lover, of a generally sensitive disposition, or remotely squeamish to approach this book with caution. Tucker depicts various experiments conducted on living and dead animals and humans, including exsanguination and vivisection. Though she doesn’t dwell on the gory details, she doesn’t shy away from them either. They form an important part of the history of blood transfusion, after all. They didn’t put me off–I found them fascinating–but just be aware that the book can be gory in places. Overall, though, this is a wonderful book for any medical or science history fans out there.

6 thoughts on “Blood Work: A Tale of Medicine and Murder in the Scientific Revolution”