Doomsday Book, by Connie Willis, is the first book I read for Ellie’s #SFvsFBingo challenge (and, other than a couple of Agatha Raisin audiobooks, the first book I’ve read this year overall). It was an excellent place to begin. I’ve been fascinated and horrified by the Black Death ever since I studied it in early secondary school, and this was an incredibly gripping exploration of that. 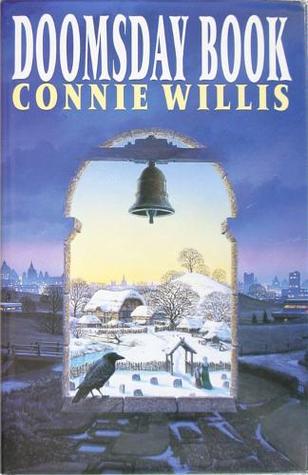 I picked Doomsday Book for the “plague” square. In fact it has two plagues and a time machine – it probably has enough science fiction plots and tropes to fill many of the different squares. It’s set in Oxford in the early 14th century and 2054, in a near-future setting where time travel is used as a research tool by academic historians. The premise of the book is that, for the first time, the Medieval department are planning to use this to send a postgraduate student (Kivrin) back to the 14th century for two weeks – a century ranked as one of the most dangerous of them all, thanks in large part to the Black Death. Her unofficial mentor, Mr Dunworthy, is very worried that the appropriate safety checks haven’t been carried out by her official mentor prior to the jump, as the latter is so excited about the possible prestige associated with being the first person to send someone back further than the 1700s. No sooner does the jump take place than a mysterious illness begins to spread through present-day Oxford.

Perhaps it was inevitable because of my love for medical history, plague apocalypses, time travel, and neurotic academics – but I could not put Doomsday Book down. In fact, I started reading it about midnight one night because I couldn’t sleep, and then I looked at the clock a little while later and discovered it was 5am – I’d read all night on a week night, something I haven’t done since I was at school. My edition had a fairly significant spoiler in the blurb (something that isn’t properly revealed until 400 pages in!), and even so, the suspense and tension the book created was very effective. I’ve read a lot of reviews that said they preferred either the 14th century or the 21st century plot, but I found both totally compelling. The action in the 14th century follows Kivrin as she moves in with an upper-class family of the time, while the 21st century plot follows Mr Dunworthy as he runs around his college trying to co-ordinate disaster relief, worry about Kivrin, and care for a child who has been left more-or-less in his care for the duration.

There were so many things I loved about this in addition to the plot elements. I found that I really, deeply cared about all of the characters – especially Mr Dunworthy and Father Roche, a priest whom Kivrin befriends – and wanted desperately for them all to be well, despite knowing that a double plague story ending with everyone in perfect health would be something of a cop-out. Normally, a story so heavily driven by plot has to sacrifice character development to accommodate it, and to some extent that happens here, but Willis’ writing is skilled enough to give relatively interesting portrayals of the main characters anyway. I particularly enjoyed the fact that there are two close friendships between men and women that do not become romantic relationships – Kivrin and Father Roche, and Mr Dunworthy and Dr Ahren, who is the physician co-ordinating medical care for those who have been struck down in the 21st century timeline.

Though the first half of the book is slow-paced, building very gradually towards action, the second half really drives home how terrifying and tragic the Black Death was without access to proper medical care. It also compares the two centuries pretty directly in terms of how people deal with tragedy – though there are wonderful medical advances in the 21st century, there are still a huge number of similarities. For example, in the 14th century, people blamed the plague on “Jews and friars”, and there was an outbreak of antisemitic attacks; in 2054, it is only three days in to the epidemic before someone finds out that the first known case is third generation British Pakistani, and people immediately start calling for an end to immigration and “importing Indian illnesses”. Human beings have changed enormously since the 1300s, and also not at all.

One rather odd thing was that the near-future setting seemed so old-fashioned. They have time travel, but they’re still reliant on landlines and handwritten notes. Mobile phones would have solved any number of problems during the book, and some of the characters’ difficulties strained my credulity a bit as a result. Similarly, Willis is an American writer trying too hard to sound English – she persistently uses the word “muffler” instead of “scarf”, for example. I don’t know anyone in the UK who uses that term; I think it probably went out with shillings and threepenny bits. Overall, though, it added to the sense of unreality in a positive way – it seemed like quite a charming world she had created.

Though this is a largely plot-driven novel, it deals with issues of faith and doubt in a way I found very interesting. Kivrin is an atheist and it felt like the book was being narrated from her point of view, but in a way that was nonetheless incredibly respectful of faith. The friendship between Kivrin and Father Roche was used as a tool for exploring this, and though Kivrin never came to share Roche’s faith, she did understand it by the end. She recognises that her staunch belief that Mr Dunworthy will come and save her is, in itself, a form of faith. I am not wild about the book implying that God is just a word for anyone we love, but nonetheless I found its exploration of these issues compelling.

Overall, I really recommend the book, though with this caveat: it is not hard science fiction. Like Station Eleven, it is about how illness in general and epidemics in particular affect people – individuals and communities. It broke my heart for the people of the 14th century all over again. By the time I put it down, I felt like I had been there with Kivrin, and stood with her and felt useless with her and been devastated with her. It is a wonderful book about people, but the science content is patchy and I remain unconvinced by some of the medical advances. If you want a hard science fiction plague apocalypse, look elsewhere – well, I haven’t read any that were good, yet. There is a very creepy thriller to be written about antibiotic resistance, but this isn’t it. However, if you want something kind and charming and sorrowful and hopeful, maybe pick up Doomsday Book and give it a shot.