I have been wanting to read Excellent Women, by Barbara Pym, for years. Honestly, I don’t know what took me so long. I absolutely loved it. Although it was published in the 50s, it felt incredibly current to me as I was reading it – despite the occasional reminders of the war, and rationing, it had a lot to say about singleness that is still definitely true. The main character, Mildred Lathbury, is a rather unfashionable single woman of around thirty. She lives by herself, has never had any great romances, does unremarkable work for a local charity, and is an active member of her local church. She is one of the “excellent women” – capable, unobtrusive, efficient, reliable, and always behind the scenes. The novel follows her life for around a year, starting with the arrival of her glamorous new downstairs neighbours, the Napiers. 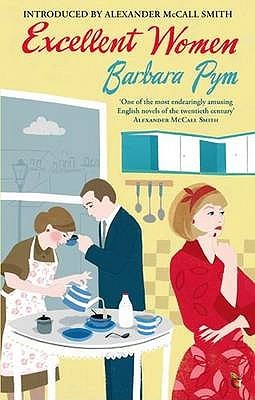 This book gave me a lot of feelings about what it’s like to be a dowdy, reliable church spinster aged around thirty, with a flat and a job, and especially about how it hasn’t changed meaningfully since 1952. Everyone has some preconception about Mildred, and all these preconceptions are strongly coloured by her singleness. Mildred’s colleagues and neighbours want her to be flashier, more outgoing – to have a boyfriend and do her hair differently. Her church relies on her to be inoffensive and diligent and to work very hard for everyone else – to be a Martha rather than a Mary, as Mildred herself realises towards the end of the novel. At one point, for example, an engaged woman who has hardly exchanged two words with Mildred asks her to take in an inconvenient relative permanently, on the grounds that Mildred doesn’t have any ties. It is very reminiscent of couples in my church* who make no effort to engage with me socially, but then suddenly ask me to babysit their children. After all, what else could a barren spinster possibly be doing with her evenings?

“Poor dears; I can just imagine them together. I wonder if there could be anything in that, or would it be quite impossible? What do women do if they don’t marry,” she mused, as if she had no idea what it could be, having been married once herself and about to marry again.

In addition to the idea that Mildred’s time is not really worth anything, there is plenty of other stereotyping goes on, and this time it is definitely not limited to church friends. Everyone assumes that Mildred is either desperate for a husband or so past it that she no longer has feelings of any kind. There is no in-between, even though that would be a far more realistic summary of her life. She’s hardly crying herself to sleep every night over her lack of a man, but she does develop an awkward crush on her unsuitable married neighbour, suggesting that she is not quite as much of a stone statue as some would think. Almost everyone who meets her immediately wants to find her a husband, and everyone has a different suggestion, and no-one actually listens to her.

I loved the way that Pym explored Mildred’s desire to be unreliable and unpredictable for once, and her total inability to do so. In one scene, she buys a dramatic lipstick called Hawaiian Fire, despite the cashier’s protests that it’s completely unsuitable, not at all her colour. Although she carries it home defiantly, we never actually see her wearing it. She knows it isn’t really the type of lipstick for a woman like her, and so sensible Mildred would never put it on, no matter how much she likes it. This book managed to be both devastating and hilarious on every page – it made me laugh at loud on several occasions, but throughout, my heart ached for Mildred – efficient, no-nonsense Mildred, who always does exactly what is expected of her.

“You know Mildred would never do anything wrong or foolish”.

I reflected a little sadly that this was true and hoped I did not appear too much that kind of person to others. Virtue is an excellent thing, and we should all strive after it, but it can be a little depressing.

The last thing that I really loved about this novel was the way it depicted Mildred’s faith. Mildred is a devout Anglo-Catholic and her faith touches every area of her life, but she is not an unrelatable zealot – she has interests, friends, and hobbies that aren’t directly connected to her church life. Yet the subject of God, in one form or another, crops up in many conversations she has during the book – not because she’s forcing the topic, but because it is an important one to her and something she thinks about a lot. She has close friends who are irreligious or atheists or a theologically different variant of Catholic, and their different beliefs are a subject of debate, but not division. That is true to my experience of being a Christian who has a lot of Muslim and atheist friends, and it is one of the most natural depictions of faith that I’ve ever read.

Pym does a wonderful job of showing that Mildred’s life isn’t actually empty or void of meaning, and that she is – overall – fairly happy with her lot as one of the excellent women. The novel refuses to categorise her as either desperately lonely or a total has-been, the way the world around her does. Like almost everyone, Mildred is more complicated than that. The joy of the novel is in watching the people around her gradually come to realise it, and to appreciate the qualities she has that go beyond her usefulness. Really, this novel is just a beautifully rendered (and very funny) character study of an interesting woman in an ordinary situation, but it is one of the best that I’ve read. I’ve been thinking about it since I finished it, and I can’t recommend it highly enough.

*I do also have wonderful friends who are married, and this should by no means be regarded as criticism of all married Christian couples. Just the ones who are still asking me to babysit their children when I am turning TWENTY-NINE in a week and have a FULL-TIME JOB.