First, a bit of background, because it’s one of those cases where it definitely affected my experience of the book. I don’t think I’ve ever been as apprehensive about any novel as I was about Lila, by Marilynne Robinson. Gilead is one of my absolute all-time favourite books, and because I read it at just the perfect time, it was genuinely and demonstrably life-changing. I’ve only read it once, but I could recite chunks of it by heart because of the impact it had on me. It’s a beautiful novel about loneliness and friendship and loss. I’ve wanted to read the companion novels, Lila and Home, ever since I finished it. I even bought Lila a few days after I finished it, but I couldn’t bear the fact that it might somehow retrospectively ruin Gilead for me, so I gave it to a charity shop without opening it.

Three and a half years later, with a bit of distance from that reading experience and that time in my life, I decided it was finally time to get myself another copy. I am so glad I did. It certainly wasn’t as remarkable an experience as reading Gilead (it couldn’t have been, simply because I am so much happier with my life now), but it was still an absolutely stunning book. Beautiful writing, beautiful characters, beautiful story. I have been thinking about it ever since I finished it (as the unusually lengthy review will probably demonstrate). 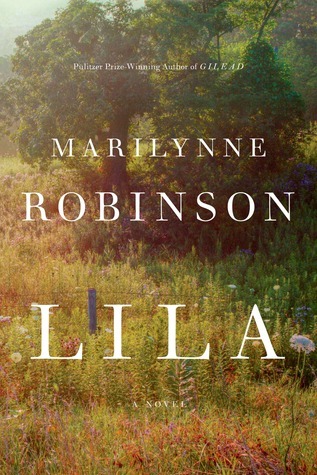 If Gilead is primarily a novel about loneliness and friendship, Lila is primarily about loneliness and kindness. It follows Lila, the main character, through a largely non-linear account of her life up to the point where she is very unexpectedly married to an ageing preacher (Reverend John Ames, the central character of Gilead), and even more unexpectedly the mother of a young son. Lila has lived a hard life since she was a young child. Homeless from a young age, she worked as a casual labourer and field hand, wandering the countryside with a small group of other homeless field hands. The book opens with her as a young child, sitting alone outside a residence that I think is meant to be a dosshouse. She is trying to catch a stray cat to play with, but when she is eventually successful, it scratches her and runs away. This is a fair representation of most of her life – it is just a long, difficult lesson in being self-reliant because, sooner or later, people will leave.

Though there are scattered and isolated kindnesses throughout the novel, Lila learns to suppress her own instinct to help and show generosity, because she can’t risk being vulnerable. This is one of the key things she picks up from the woman who raises her, Doll. Doll is tough, scarred, determined – and she throws all of that into trying to prepare Lila for a world that will be hard and uncaring, because she thinks (probably pretty accurately) that this is the best act of love and protection that she can show her. Lila is taught that kindness should be distrusted, that favours shouldn’t be accepted if they can’t be returned. When she finally comes to a place that is stable and secure, the reader can see how scared she initially is of her desire for stability and human connection, because both of these were a source of immense danger for Doll – and because even Doll lets her down, in the end.

I am not normally a fan of non-linear narration in books, but I loved it here. Cutting backwards and forwards between the different events in Lila’s life is a masterclass in character development. Robinson is so skilled at saying a great deal very succinctly. We watch as Lila becomes lonelier and more closed-off, shut down, over the course of the novel – but we also get to see her humanity and compassion and iron stubbornness. I had a lot of questions about the relationship between Lila and Ames in Gilead – it’s a supremely unlikely match, on the face of it. This way of showing the story of her life and the early days of their romance is a perfect way to show how suited and unsuited they are to each other, and how genuinely moving their relationship is. Unlike Gilead, there’s a third person narrator, but it’s still exclusively from Lila’s perspective, and it is wonderful to see her gradually begin to trust herself enough to risk being happy.

This is a book that’s very interested in theology – much more so than Gilead, I would say. I don’t agree with Ames about everything, but I do think it is a very approachable route in to thinking about these topics, even if this isn’t something you’d normally be interested. Early on in the novel, Lila asks John Ames “why do things happen?”, really asking the age-old question about human suffering and the love of God, and much of the novel is set aside for an exploration of that topic. It’s an immensely compelling way of exploring it that I’m still thinking about several days later. Ames owns that he doesn’t have a particularly worked-through answer, even though it is something he’s been thinking about for most of his life. Their debate about these issues threads through their entire relationship, both of them treating the other’s views and thoughts with immense respect and increasing tenderness throughout. It’s a fantastic way of making this relationship, which on the surface ought to be very troubling in its power dynamic, into an absolute partnership of equals. Ames learns at least as much from Lila as she does from him. It’s lovely. It’s so lovely.

Things happen for reasons that are hidden from us, utterly hidden for as long as we think they must proceed from what came before, from our guilt or our deserving, rather than coming to us from a future that God in His freedom offers us.

One of the charms of this book, for me, was the way that gardening and growing crops changes and shifts in meaning over Lila’s life. For years, growing crops for other people was how she supported herself. She knows the country inside out, can read the weather and the fields and the animals, and farming was just a means of getting by. When she arrives in Gilead, she takes over an abandoned shack, and, as she gradually settles down despite her original intentions, she plants vegetables and fruit for herself, beginning to enjoy the time that she spends in her garden. (Side note: this book has some of the most beautiful and extraordinary writing about nature that I’ve ever read). And eventually, as she is starting to fall in love with Ames, she sneaks into his garden to plant potatoes and tidy his roses, because she can’t bear for it to be so messy and uncared for. I know that writing it down in such prosaic language makes this sound like a very trite bit of symbolism, but is slipped in in subtle and wonderful ways throughout the novel – I am still thinking about the berries in Lila’s garden, in the geraniums she cut for her home.

Writing this review and thinking over the novel, I think I have convinced myself that I actually did love this almost as much as Gilead. The immense kindness of the book, and the different kinds of kindness shown – Doll, trying to harden Lila up because she knows the world will be hard right back; the well-intentioned but utterly misjudged charity of the churchwomen that Lila meets early on in Gilead; the immense tenderness that Lila and Ames demonstrate for one another throughout the stages of their relationship; Lila’s own generosity towards so many of the people she meets, once she feels safe enough to show it. I suspect that these things will stick with me for a long time.