Can you believe it? It took ten entire books for me to deviate from my planned 20 Books of Summer list (and even then, it was only after trying valiantly to finish The Yiddish Policemen’s Union for seven weeks that I gave up and switched it out for something else). Anyway, I have just finished The Home-maker, by Dorothy Canfield-Fisher, and I absolutely loved it. Published in 1924, this is one of the earliest books republished by Persephone – it’s number 7 in their collection. 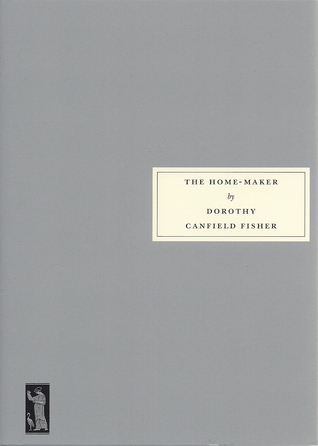 The Home-maker opens with Mrs Evangeline Knapp, furiously and frustratedly scrubbing at grease spots that one of her children has left on the floor. Mrs Knapp (and she is definitely Mrs Knapp, not Evangeline) is a home-maker, bending all of her energy into raising her children “right” and making the perfect home for them and their father, Lester. She is so determined to be the best possible wife and mother, in fact, that she has quite unintentionally become a tyrant. Mrs Knapp is so obsessively house-proud that her children are scared of her; she’s so insistent on giving them the right diet that one of her sons has ended up with a “nervous stomach”, which of course necessitates an even stricter regimen; to her youngest son, not yet at school, she is nothing but a litany of criticisms. Mrs Knapp is miserable, and so are her children.

Lester Knapp (definitely Lester) is also miserable. Arty and dreamy and imaginative, he has a low-paid job as a clerk at a local shop, where he has never made any career progress whatsoever. Because he hates the job, hates the mindless drudgery of it, he cannot seem to put his all into it. There are a few little bright spots in his life. The first time we see the Knapp children relaxing, it is when they go to meet their father after work. He also loves poetry, and whenever the novel is coming from Lester’s perspective, it is threaded through with quotes, literary allusions, and stories. Overall, though, he is desperately unhappy. He knows that his wife is disappointed in him – they are just scraping by, and other women in the parish have new clothes or can afford to hire help. Because Lester has absorbed so completely the message that men have to provide for their families – that that’s what they do – he is starting to genuinely believe that they would be better off without him. Between Mr and Mrs Knapp, the start of the novel is very dark.

In the first few chapters of the novel, the tension is building in a very ominous way. There is an awful family dinner, where no-one really says anything much, and everyone feels terribly awkward, and the food is delicious and nourishing. Everyone is very clearly on a knife edge. The dinner is broken up when Mrs Knapp pops into the kitchen for something, and all of a sudden, they hear her start to cry – not little tears, either, but those enormous, can’t-breathe-for-it sobs that are terrifying to both experience and witness. Her son Henry has, once again, dropped grease spots on the freshly-scrubbed kitchen floor.

The novel has a feeling of building inexorably to something terrible, and lo and behold: Lester nearly dies in an accident. Suddenly paralysed from the waist down, he is utterly unable to work – to start with, barely able to get out of bed. Mrs Knapp, efficient as ever, bustles out to his workplace and offers to take his job. Someone has to bring the money in, after all. As Lester starts to get better – well enough to move in a wheelchair, at least – he starts to look after the house while his wife goes to work. And a funny thing happens: both of them thrive, and then the children thrive, and they don’t know what to make of it.

After having been so dark to start with, the change in tone is just lovely. Prior to Lester’s injury, all their obstacles had been internal, intangible, and impossible to articulate or even identify. Suddenly, dealing with fresh pain, trying to cope with the pity of their neighbours, both Lester and Evangeline (and she is starting to be Evangeline, now, and sometimes even Eva) find that they are much more than they had ever realised. They had simply both been in the wrong place. Towards the end of the novel, Lester is musing on how difficult it must have been for Eva, doing the housework, desperately, horribly competent, unintentionally squeezing the life out of their family.

That complacent unquestioned generalisation, ‘The mother is the natural home-maker’; what a juggernaut it had been in their case! How poor Eva, drugged by the cries of its devotees, had cast herself down under its grinding wheels – and had dragged the children in under with her. It wasn’t because Eva had not tried her best. She had nearly killed herself trying. But she had been like a gifted mathematician set to paint a picture.

Watching a family that had nearly been crushed by the expectations that society had placed on them become happy (and so tentatively happy, to start with) is an absolute delight. The writing is gorgeous, and the three main perspective characters – Eva, Lester, and their youngest son Stephen – are all very different, so the reader gets three different perspectives on the changes that are happening in the family. Nobody dares to say that Lester’s injury is the best thing that could have happened to the family – what an awful, cruel statement that would be, after all – but the fact is that the family were heading inexorably for a cliff, and the accident turned them onto a new path altogether.

I sometimes jokingly say that my favourite books are all sad, quiet ones where nothing happens – and it is certainly true that this book is not packed with plot – but I think there is enough in here to keep the story going. When I got to the midpoint, I forced myself to slow down and only read a chapter or two a day, because I wanted to make it last. It’s not what you would normally think of as a page turner – a small, domestic novel – but I could barely put it down.

Of course, it does have flaws. I think that in places, it is a little mawkish. Not nearly as bad as it could be, given that some of it is narrated from a child’s perspective, but in just a couple of paragraphs, it felt a bit like a holdover from a moralistic, sentimental Victorian style, which didn’t sit well alongside the more modern writing in the rest of the novel. There is also some dated and unfortunate language about race in a couple of places (the phrase “treated him very white” comes up, for example). Accurate to the time and place, but it’s jarring to read it in an otherwise very kind novel, and it pulled me out of the story when it happened.

Nonetheless, this is one of my favourite books of the year so far. Canfield-Fisher always described this as about the rights of children, and the importance of recognising the work of home-making for the invaluable and difficult job it is – regardless of the sex of the person doing it. From that point of view, it certainly succeeds, but I think it also succeeds as a story in its own right, not a didactic fable about the issues with rigid traditions. I cared so much about the characters that it never really felt preachy, even at times when the characters were espousing views that seem outdated to modern eyes. I am sure I will be revisiting it some day soon – it’s the type of book that I want all my friends to read, so that I can discuss it with them, so I really recommend it.

9 thoughts on “The Home-maker #20booksofsummer”