I did it! I did it! I finished The Silmarillion (and then I didn’t write about it for several weeks because September is always nightmarishly busy)! This honestly feels on par with finishing my PhD. It’s difficult to know how to review this strange, fascinating book – The Silmarillion is not really a novel in the strictest sense of the word, nor a collection of short stories. It is written like a history book, or perhaps a book of myth. There are some unbelievably dry, dull chapters, and some grippingly unputdownable ones. Unfortunately, the former are clumped together at the start of the book, which perhaps explains why I’ve started this four or five times, and finished it once. Finish it I did, though! Quick note – I will be referring to a couple of specific plot points in Lord of the Rings, though I won’t spoil anything major. 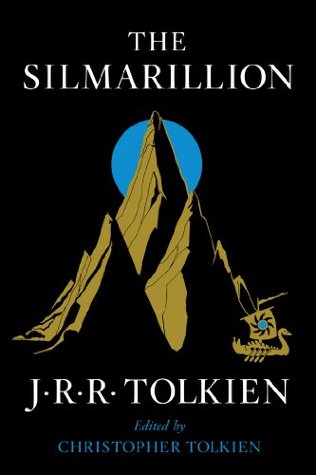 Despite the difficulties I had to start with, I ended up really loving The Silmarillion, and I’m extremely glad I read it. When you read Lord of the Rings or The Hobbit, especially the former, you get these occasional hints at a much deeper mythology underpinning them. Characters are constantly singing songs about, or making other allusions to, a shared history that isn’t made available to the reader. Even though some of this detail is explained in the appendices, and even though the non-Baggins hobbits are there as a kind of uninformed reader analogue, you still come away knowing that you haven’t seen all the worldbuilding that underpins the story. Reading The Silmarillion filled in a lot of those gaps – especially the story of Beren and Luthien, which crops up fairly often in Lord of the Rings.

The writing is, of course, stunning. The Silmarillion generally lacks the humour of Tolkien’s other works, but we get to see characters like Galadriel and Glorfindel in a completely new context. I loved seeing Galadriel as – if not a villain – certainly a somewhat shady character making bad decisions. Seeing her flaws writ large over millennia of storytelling makes her actions in Lord of the Rings all the more remarkable. Galadriel is one of the Noldor – High Elves, arrogant, hungry for more and more power, who rebel against the Valar, the small-g gods of Tolkien’s world. Galadriel is not the main leader of the revolt, but she is certainly a key figure. By the end of The Silmarillion, she is one of the last Noldor remaining on Middle Earth, and her power and glory are greatly diminished. When she turns down the Ring in Lord of the Rings, knowing that it will mean she fades completely, being aware of her history adds richness and character development that we don’t get in the novel itself.

It wasn’t just a case of appreciating how much it explains the backstory to my favourite novel, though. Many of the stories in The Silmarillion are gripping in their own right. The standouts for me were Of Beren and Luthien, and Of the Voyage of Earendil. These two tales (along with Of Turin Turimbar, also very good) come towards the end of the book, and act as a wonderful capstone to the themes and stories from earlier on. It’s not really the type of book where you can skip ahead to the good bits, but it does reward patient and careful reading. I can certainly see why publishers turned it down in Tolkien’s lifetime, but I can also see how his son was able to transform some of these stories into full-length novels that were incredibly well-received among Tolkien fans. There is such a mixture of genres, character types, plots. There’s probably something in here for everyone, even though there is also almost certainly plenty that isn’t for everyone.

I found myself wishing, as I read, that I could get hold of some feminist literary scholarship of this book. Tolkien is often criticised for his lack of female characters (which is an entirely accurate, though dull, criticism when you look at The Hobbit and The Lord of the Rings) and their lack of agency when they do show up (which I’m not nearly so sure about). Anyway, The Silmarillion is teeming with interesting, flawed, and capable female characters. Women warriors, ruling queens, explorers, and heroes – though there are fewer female characters than male, they are certainly not relegated to quiet, submissive roles. The sexual ethics of the book are also interesting. In many ways, these stories are about a cycle of fall and redemption – and the last thing the male characters often do, the thing that indicates that they are now on an absolute path for destruction, is some sort of coercive sexual behaviour. Forced marriage and sexual assault crop up from time to time in the pages of The Silmarillion, and we are meant to be horrified as we watch men and elves alike take women for their own pleasure or to advance their own power. Conversely, relationships where both parties are equally invested and engaged tend to have hugely beneficial and important effects on the overarching. I’m not saying that Tolkien never has dated representation of female characters in any of his works – he was of his time, as we all are – but I do think that the depiction of women in The Silmarillion goes a long way towards addressing some of his critics’ most repeated complaints.

This review is rather disjointed – there are too many different bits and pieces in The Silmarillion for me to write about it coherently. Suffice to say, I really recommend it if you love Lord of the Rings (though do not start here). Brief shout-out to a podcast: probably the only reason I finished was that I would read a chapter and then listen to the corresponding episode of The Prancing Pony Podcast, which helped me to slot the ideas from that chapter into the appropriate bits of Lord of the Rings and The Hobbit. At >1 hour per chapter (and ~6 hours for On Beren and Luthien), this is a solution only for die-hard Tolkien enthusiasts. Fortunately, I am absolutely one of those. Reading The Silmarillion has only made me love him more.

6 thoughts on “The Silmarillion #20booksofsummer”