Murder Must Advertise is the eighth novel (and tenth book) in the Lord Peter Wimsey series by DL Sayers. It is largely set in an advertising agency – a world Sayers knew extremely well, as she spent many years working as a copywrighter for S H Benson, where among other things she wrote the copy for the Guiness “Toucan” campaign (below). Some sections of the novel are set in London’s various and iniquitous drug dens, a world the reader suspects that Sayers didn’t know quite as well, though it is rendered with equal enthusiasm and vigour. At the start of the novel, Victor Dean, a junior copywriter at Pym’s Publicity, has just met a rather gruesome end following a slip on a rickety iron staircase. Unfortunate, of course, but there can’t be anything more to it than that. Can there?

I really enjoy the Wimsey books – mostly – but I acknowledge that Lord Peter is someone I love on the page but would be utterly unable to stand in person. It’s as if Sayers has taken both Jeeves and Wooster, shaken them together, and slapped the resulting character into the middle of Relatively Serious Fiction. Peter is a very brilliant man who knows people think of him as an upper-class twit, and so he leans into the “silly ass” aspects of his character to take people off their guard. His arc away from that persona over the course of the books is one of the things that really makes the series for me. Peter gradually learns to manage his lingering shell-shock from WWI and realises that he wants to be a genuinely useful member of society. Seeking out justice, he realises, is a more helpful way to spend his time than mucking about at his club, having affairs with opera singers, and buying expensive first editions. Ironically, as Sayers became more successful and financially comfortable, the novels actually become less snobbish and are more interesting in the way they depict class. 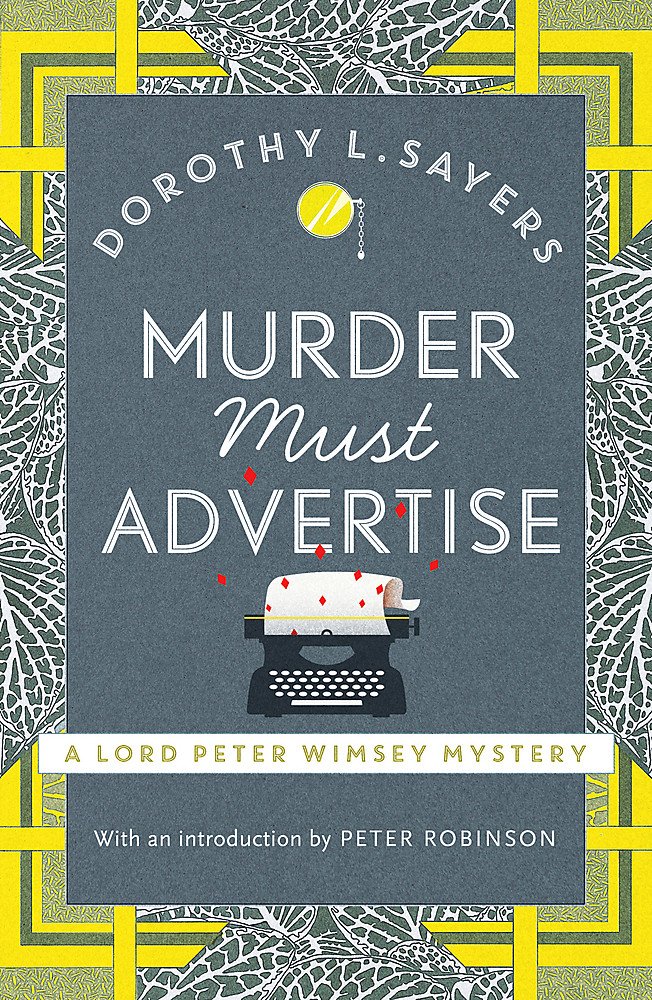 Why am I leading off with this preamble? Because Murder Must Advertise begins with Peter undercover at an advertising agency, disguised as his disreputable cousin Death Bredon, and in full Silly Ass mode. That doesn’t bother me in the early novels because I know he’s going to develop, but this Peter – a Peter who knows better but is stepping back into that persona – is frustrating to spend time with. He is frivolous and callous, and makes distasteful comments about class. While disguised as Bredon, he also scatters his speech pretty liberally with racial slurs (including the n word), which – though they do crop up in Sayers periodically – tend to be used to indicate that a character is narrow-minded or behind the times. Essentially, Sayers has spent the last eight novels growing Peter away from the loosely-sketched archetype that she starts with, and making him a joy to spend time with – and then she shoves that archetype in at the beginning of this novel, turned up to eleven. It is a very effective strategy for Peter. His new colleagues assume his is a harmless idiot who has perhaps lost all his money in the crash, and is having to make his own living for the first time in generations – so they relax around him, and even laugh at him a little. This is one of those times where Sayers certainly made the right decision stylistically and for the plot, but in doing so, made the start of the novel a lot less fun to read.

Thankfully, Sayers’ acutely entertaining depiction of the the world of advertising more than makes up for the irritation of seeing Peter back at square one. I could certainly tell that she was drawing on a topic she knew inside out. It seems strange to talk about worldbuilding outside speculative fiction – but from the opening pages of this novel, Pym’s Publicity feels established and realistic. As you read, you can feel that this is a world in which characters have historical office politics, inside jokes, and pre-existing relationships, and that the plot of Murder Must Advertise is just a brief interruption to all of that. Sayers clearly had a wonderful time lampooning the profession that she knew so well. Peter, who “like all rich men” had never paid attention to advertising before as he can simply buy whatever he wants, is startled and alarmed to discover what tricks companies play on lower- and middle-income citizens to part them from their hard-earned cash. One of the accounts Pym’s holds, for example, is for a tobacco company, and there is much discussion as to how that company can convince women to take up smoking in earnest for the good of their children. Many of the products the company advertises for are universally disliked among the copywriters.

“Of course, there is some truth in advertising. There’s yeast in bread, but you can’t make bread with yeast alone. Truth in advertising,” announced Lord Peter sententiously, “is like leaven, which a woman hid in three measures of meal. It provides a suitable quality of gas, with which to blow out a mass of crude misrepresentation into a form that the public can swallow.”

As for the mystery itself, that is neither here nor there. For me, Sayers is the opposite of Christie – I love Christie’s puzzles and intricate plotting, but sometimes her setting and characterisation fall a little flat; Sayers’ characters fizz with life, but her mysteries are not as carefully planned or thought out. Both the strengths and the weaknesses of this series get stronger as the books progress, and this is no exception. I guessed about half of the plot, and was sufficiently entertained by the other half. There is a lot of pleasure in watching how Peter carefully establishes two versions of himself – Mr Death Bredon, disreputable man about town, and Lord Peter Wimsey, his responsible and careworn cousin – aided and abetted by Chief Inspector Parker. Charles Parker, by this point, must have broken absolutely all of Scotland Yard’s rules about the involvement of civilians. He is another point of light and joy in this novel. By this point in the series, he is married to Peter’s sister Lady Mary and the happy, tired father of two, but that doesn’t stop him from becoming involved in Peter’s exploits. Parker was absent from Five Red Herrings, the previous Wimsey novel, so it was a delight to see him working with Peter again.

Overall, I really enjoyed this novel. I do think it could do with being about 75 pages shorter, and the stuff in London’s assorted nightclubs was a bit unnecessary, but the insight into what advertising was like in the 1930s is fascinating. If you like the Wimsey novels, then once you get used to the peculiar set-up, I’d say that this is one of the best of the series. If you don’t like Peter, though, this will not be the novel to convince you otherwise.

8 thoughts on “Murder Must Advertise #20booksofsummer20”