Is my 20 Books of Summer list… cursed? This is the third book by an author whom I have previously loved that I just couldn’t get on board with. First Galloglass, then Destination Unknown, and now this. If you count Murder Must Advertise, which I liked well enough but not as much as other Sayers novels, that’s four disappointments. First Among Sequels is, appropriately enough, the first book in Jasper Fforde’s second Thursday Next series. I loved the first series of these books, which started with The Eyre Affair and concluded with Something Rotten (in my view the best of the four instalments). These books are metafictional adventures about the nature of reading. The central character, Thursday Next, lives in an alternative version of the 1980s, where the Crimean War is still going on, dodos have been reengineered, and everyone is obsessed with Shakespeare. In the first book, The Eyre Affair, she falls into Jane Eyre and gets drawn into helping Mr Rochester deal with an intruder. Subsequent books have focused largely on her adventures at Jurisfiction, the organisation responsible for maintaining order within the world of fiction. The books also feature time travel, occasional vampires, and George Formby as Honorary President for Life. They are weird books (but also tremendous fun), is what I’m saying. 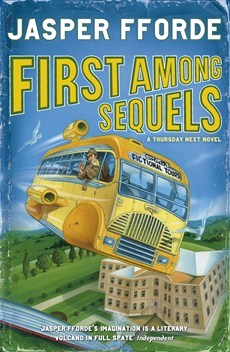 At the start of First Among Sequels, 14 years have passed. On the face of it, Thursday is living a very simple life, working as a carpet fitter with friends from her old job, and looking after her three kids: Friday, Tuesday, and Jenny. Of course, carpet fitting isn’t a particularly well-paid profession, it isn’t very exciting, and if she occasionally takes a freelance job trying to catch an escaped Minotaur or dealing with a demon who has taken the form of an extremely genial elderly gentleman, can anyone blame her? I wouldn’t. And if sometimes she has to tell her husband that she’s going out to do emergency stair carpet fitting at 2am, surely he won’t be able to see through it. This plot concerns Thursday’s life as she is forced to confront the secrets she has been keeping, while also coming up with a way to raise global reading levels, which have been plumetting dangerously for years. From living in a world where “Baconites” go door-to-door asking people if they really believe that Shakespeare wrote the First Folio, Thursday is now married to an author forced to write books like 100 Cute Pictures of Hamsters to make ends meet, because no-one is buying novels any more.

Unfortunately, unlike the rest of the books, this now feels really dated. First Among Sequels was published in 2007 and set in 2002, and it precisely reflects the concerns of the mid-00s. Chief among these is the presence of reality television, and a great deal of hand-wringing about whether the resulting short attention spans will cause the apocalypse. Firstly, these concerns switched to being about smartphones a couple of years after First Among Sequels published, and secondly it turns out that neither reality TV nor smartphones are the most apocalyptic thing to happen in the early 21st century. It feels rather quaint to believe that they are. Because the earlier books were set in a world that was so different, they seemed relatively timeless, but lots of those things have changed by the time First Among Sequels rolls around. It tries to be topical and inevitably dates itself as a result. The weird, literary-steeped world in which Thursday lives has vanished, and she inhabits an England somewhat similar to ours – which makes it much less interesting to read about.

Also, the creep of Americanisms into British fiction irritates me a little at the best of times (“cell phone”, “cookies”), and it sticks out particularly in this book because Fforde is a Welsh-English writer who normally differentiates the speech patterns and vocabulary of his characters based on which nation and which region they are from – it’s subtle but it’s definitely there. That’s missing from this particular book. It’s also a bit patronising to the transatlantic readership. Audiences around the world are constantly being asked to understand American vocabulary in television, film, and literature; do American publishers really think their audience is incapable of returning the favour? That seems rather silly. Coupled with a new audiobook narrator who could not do regional accents, a lot of the worldbuilding was suddenly a bit watered down.

This is still a Thursday Next book, though, and I enjoyed plenty of individual aspects of it. The metafictional elements of the series are ramped up to eleven in this book, with Thursday eventually meeting two of her counterparts in the world of Jurisfiction – from the Thursday Next novels written about her adventures of the first four books. This took me a bit of skipping back in the audiobook and relistening a few times before I could get the hang of it, but once I got my head around it, I loved the idea. Fforde uses it as interesting commentary on what sells crime novels (remember, in-universe, Thursday is technically a police officer), and what does not. Similarly, the world of Jurisfiction is one of my favourite constructions of any fantasy novel, and in this book Fforde continues to flesh it out, adding texture and tradition, and finding new ways to play with it. Thursday doesn’t spend as much time there as I would have liked, but it’s enough to leave me wanting more.

Overall, though, there is just no cohesive story. When I started this review, I went to Goodreads to see when it was published, and discovered that the blurb for First Among Sequels makes mention of a serial killer being on the loose in the book world. I started the review less than a week after reading the book, and I had already forgotten about that, because there is so much other stuff rammed in here that it had gone completely out of my head. When I think back on the book now (I’ve been writing this review over the course of about two weeks), I cannot grip on to any particular plot, because the book just has too much in it. Books 1-4 had their faults, of course, but they were always brilliant stories, and though those books were also jammed full, I could always pick out the central narrative. This just gets lost in itself.

All in all, I wouldn’t recommend this as a good place to start with Thursday Next. Pick up The Eyre Affair instead. However, if you reach the end of those four instalments and find yourself wanting more, this is a good read in itself. I will certainly be reading the follow-up, One of Our Thursdays is Missing. I hope this book turns out to be padding or filler to bridge the gap between the excellent Something Rotten, and something even better. The next audiobook returns to the original narrator – I guess the publishing company didn’t think much of the Welsh accents here either? – which should hopefully help. And I really, really hope that my next book by a beloved author does not let me down!

8 thoughts on “First Among Sequels #20booksofsummer20”