Utz, by Bruce Chatwin, is a short novella about the eponymous Kaspar Utz. Utz lives in Czechoslovakia before, during, and after World War II – most of the novella takes place during the Cold War. He is devoted to his enormous and obsessive collection of Meissen porcelain. Although Utz is permitted to leave Prague once a year to visit Vichy for his health, and he considers defecting each time, he cannot bring himself to leave either his collection or his country. 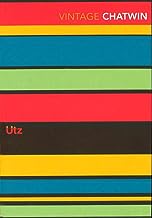 This is a strange little book. It opens with Utz’s funeral, and then zigzags around the various events of his life. At the time of his funeral, it seems, Utz is an eccentric and largely unloved man, mourned only by his close friend Dr Orlik and his maid Marta. Chatwin proceeds to gradually investigate Utz’s life, using a loose frame narrative – a first-person narrator in the form of an English journalist, who is writing an article about obsessive collectors. The frame narrative appears and disappears at various times, with many sections in third rather than first person. I think this is one of the strengths of the novel – it’s not always clear what is the narrator’s perspective, and what is fact. That’s not my favourite method of telling a story but Chatwin does do it very well. The story is well-written overall, in fact. I felt like I really got a sense of Utz’s claustrophobic, porcelain-stuffed apartment, and his peculiar relationships with the various people and objects in his life. The novella explores the way that Utz is simultaneously devoted to and dominated by his porcelain collection, and sets it against the backdrop of Communist policy around private possession of art. Utz works hard to save his collection from the state because he loves it, but he also loves his collection because he has saved it from the state.

Unfortunately, even though this was done really well, it wasn’t for me. I suppose this might be getting into spoiler territory, though I’ll try to steer clear of specifics. I love the kind of novel that this purports to be – which is a slow, non-linear character study of an interesting person, hung around one or two major events. Most of the book is given over to carefully peeling back the layers of Utz’ life, showing us a sadder and more interesting life than we would have expected of him. The reader gets glimpses – fleeting at first, and then longer as the story progresses – of why this porcelain is so important to Utz and what it represents to him. For example, we watch him make good and bad choices during the occupation, and we find out why he made them. The gradual unpacking of a character who, at first glance, is a stock stereotype, is a subgenre of literary fiction that I really love.

In the last few pages, though, the reader abruptly finds out all sorts of things about Utz that utterly turn our conception of him upside down. I really hate this type of thing. It’s one thing for a thriller to have a twist ending, but I don’t really understand the point of it in something that is explicitly – even by its name – a character study. It seems to me that a book like this is meant to give you insight into a person. To my mind, the information at the end is inserted too suddenly and too late to allow the reader to reconsider Utz as a person. A less trusting reader, or someone who is better than me at reading between the lines, might well have picked it up much earlier. That’s why I say this isn’t for me, rather than that it isn’t any good – I read literary fiction almost entirely to spend time with characters and get to know their motivations, and this didn’t allow me to do that.

This is very well-written, and if you are more tolerant than me of unreliable narrator-type stories then you might really enjoy it. I enjoyed so many aspects of this – the examination of property laws in Communist Czechoslovakia, the gradual shifts in how these laws are applied at different times, the careful and thoughtful writing. It wasn’t put together in a way that appealed to me as a reader, but it is certainly a good book. I will also probably read more Chatwin in the future – I didn’t like his story, but I loved his style. Still, it’s another one off the 20 Books of Summer list – I feel like I’m getting through them at a pretty good clip!