Look. We’ll get it out of the way. At the heart of The Snow Queen (Joan D Vinge) is a romantic relationship between two first cousins, born on the same day, who have been raised as twin brother and sister. I did not find that any less distasteful (or more plausible) by the end of the book than I did at the beginning. This crops up from time to time in science fiction, where science fictional reasons can be found that it’s okay for close relatives to sleep together because one of them is secretly not who they think they are. No. It’s weird to get involved with someone who has been your adopted sibling since almost your first breath (regardless of whether they are actually also your cousin). No-one in the book even thinks it’s strange, which bothered me. The reader keeps being reminded, as well: “your closest kinsman and your lover”. I’m mentioning it at the start, because it informs so much of the characters’ motivations that it ends up running through the whole book, and it therefore strongly affected my enjoyment of it as a whole*. 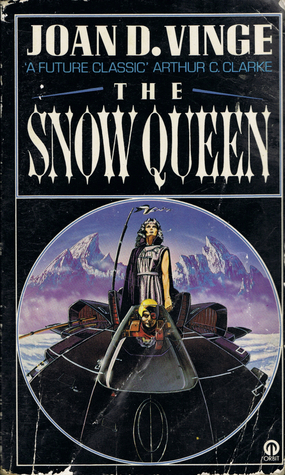 Now that’s off my chest, was the rest of the book good? Well, I think so, though I’m still not sure. The Snow Queen is about a world called Tiamat, which alternates between Winter rule (when there is lots of technology, and people from other worlds come to the planet basically to party), and Summer rule. Summer looks a lot more like what we would think of as a traditional fantasy setting: it has a “simple” society, with sybils and fishing villages and inhabitants who are initially portrayed as a little backwards compared to the big city Winter folk. As the story unfolds, it becomes apparent that the Summers tend to destroy or abandon any technological advances made by the Winters the minute it’s their turn to be in charge. As the narrative opens out, we find that this is a much more complex balance of power than we are first led to believe. Vinge skilfully drip-feeds information into the plot that slowly uncovers more and more of the world she has created.

I was fascinated by the contrast and underlying conflict between these two cultures on Tiamat, especially as it is apparent early on that the Winter Queen, Arienrhod, is artificially extending her rule by wholescale slaughter of creatures that the Summers consider sacred. As the story opens out, we begin to learn much more about these creatures and about other worlds that are merely hinted at to start with, prompting questions about how complicit the offworlders are in Arienrhod’s behaviour. This ethical issue was the most interesting part of the book for me. It reminded me, a little, of the complexities involved in the way various Star Trek captains interpret and implement the Prime Directive. For the most part, I think that this is addressed subtly and thoughtfully – it is so easy for speculative fiction about ethics to become ponderous and meandering, but the discussion is integrated well into the overall plot.

Something that took a little while to get used to, but that I ended up really enjoying, was the representation of different languages in the story. Often, speculative fiction writers will invent one or more new languages as part of their worldbuilding, but unless they are a Tolkien-level professional linguist, it doesn’t always work so well. Vinge didn’t make the attempt. Instead, she showed when characters were speaking a different language by changing up the syntax and vocabulary being used, while still sticking to words recognisable as English. No awkward footnotes or lengthy glossaries, but it was always clear when characters were speaking in a language other than that of Tiamat. It was a trifle difficult to read at the start, but it was always possible to follow the changed syntax and vocab with a bit of effort, and I got completely used to it by about halfway through. In my experience of speaking in a second language (though I am very rusty!), and then transitioning back to English, I generally find that I can remember vocabulary but get my word order muddled for a while. This way of representing the use of different languages therefore felt both truthful and original. I’d probably say that this is the most innovative thing about the way the story was told, and something I would enjoy seeing other writers experimenting with.

I did feel a little bit like I’d been hoodwinked into reading a fantasy story that has been marketed as science fiction. I prefer my fantasy and science fiction clearly delineated, and in this book, the science is very handwavy – computers acting like magic, basically. Basically, when I am reading fantasy, I like a well-explained and justified magic system, but it doesn’t bother me too much if it’s absent; in science fiction, unless it’s intentionally written as silly and trope-y, I want some sort of plot credibility there. The other thing is that this novel, like so much of the older science fiction I have read, feels like it is playing on recycled tropes – though of course in 1980 lots of it would have been fresh and original. This is not at all a fair criterion to use when judging a book, except that some older science fiction does hold up. Although this book uses technology to explain away things that the Summers assign mystical purpose to, I felt like it was more of an urban fantasy novel than science fiction. I get the impression that there might be more explaining in the subsequent novels, but there wasn’t enough in this first instalment for my personal taste.

I will probably not read the subsequent books. It took me a long time to get into this, and even though I ended up respecting the scope and ingenuity of the plot and worldbuilding, it is generally the characters that make me want to read on. Although there were a few people that I wouldn’t mind revisiting, the core characters (Moon, Sparks, and Arienrhod) were not compelling enough for me to venture into it again. For an alternative, more positive viewpoint, maybe check out Melanie’s review at Grab the Lapels – her recommendation prompted me to pick this novel up, and I agree that this is a well-written and thought-provoking book. It just wasn’t for me.

*I recognise that this is intended to reflect the “boy next door” plotline of the fable, but there are a lot of ways of doing that without making them cousins/adopted siblings siblings/lovers simultaneously.

3 thoughts on “The Snow Queen”